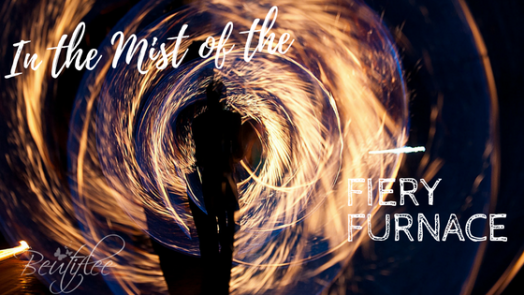 Lets go to the book of Daniel, Chapter 3 NKJV:

“To you it is commanded, O peoples, nations, and languages, that at the time you hear the sound of the horn, flute, harp, lyre, and psaltery, in symphony with all kinds of music, you shall fall down and worship the gold image that King Nebuchadnezzar has set up; and whoever does not fall down and worship shall be cast immediately into the midst of a burning fiery furnace.”

All of the people, across the nation, out of fear, bowed down to worship the golden idol, everyone but Daniel friends. They “disobeyed” the King’s decree. I highlight disobey, because people feel we disobey their authority when we choose to live under the law of God. We belong to God, not to people.

Accusers came forward to tell the King about the three Hebrew men who did not worship the idol. King Nebuchadnezzar, full of rage and fury called for the men to be brought to him. The king asked,

“Is it true, Shadrach, Meshach, and Abed-Nego, that you do not serve my gods or worship the gold image which I have set up? Now if you are ready at the time you hear the sound of the horn, flute, harp, lyre, and psaltery, in symphony with all kinds of music, and you fall down and worship the image which I have made, good! But if you do not worship, you shall be cast immediately into the midst of a burning fiery furnace. And who is the god who will deliver you from my hands?”

Why does the enemy threaten those who are covered by God? The enemy made the same attempt on Jesus when he was fasting in the wilderness. The enemy loves to taunt the believers , “If You are the Son of God….” Matthew 4:1-11. Yet, what set Jesus and these men apart was their supernatural faith. Jesus said, “You shall not tempt the Lord your God.” Oh, how wrong the enemy was and foolish to taunt God. These men and Jesus knew, which they have always known, God will not leave them, nor forsaken them. Nebuchadnezzar’s idol was made from his own hand and used to rule over others through fear. This idol could not withstand the power of God. God rules not by fear, but by love.  Almighty God created the Heavens and Earth, humanity, and flung the moon and stars in the sky. This false replica of an idol isn’t capable of such supernatural power like LOVE.

When God has position you where he needs you to be, you will not fear people. -Steven Furtick

The three Hebrew men were not afraid of the Kings threats. In fact, they boldly answered the King with Godfidence. Their answer prove how deeply buried they were inside of God, even as they would face death. They called on Jesus not only to rescue them, but they knew confidently God would walk with them through the fire.

“O Nebuchadnezzar, we have no need to answer you in this matter. If that is the case, our God whom we serve is able to deliver us from the burning fiery furnace, and He will deliver us from your hand, O king. But if not, let it be known to you, O king, that we do not serve your gods, nor will we worship the gold image which you have set up.”

King Nebuchadnezzar in his fury, let pride settle his final decision. The King sentence the three men to be bind and thrown into the furnace. The scripture says, the guards who bind the three Hebrew men died due to the exceedingly hot furnace (lack of faith and lead by fear), but Shadrach, Meshach, and Abed-Nego fell down, bound in the midst of the burning fiery furnace. The fire had no effect on the three Hebrew men. The sight of this, shocked the king.

The fire had no power to harm the three Hebrews, not while Jesus stepped in. That is what we called Faith. Jesus stepped in and showed out. These men knew the fire could not burn deep into their spirit where Faith reside. The name of the Lord was on these mens heart, stained with the blood of Jesus. The three men showed so much Faith, Jesus not only protect them, but he walked in the fire with them. He endured the pain along with Shadrach, Meshach, and Abed-Nego.

The fire only burned the ropes off, signifying the burning of the men held in bondage. Jesus came to set them to freedom. Gods word burns true, its a fire on the heart, which is a flame that cannot be put out. Gods word unbinds us from the enemy. Was it because Jesus broke them free? Or was it because their faith set them free? If you’ll notice, when the King decided to throw them into the fire, the three Hebrew men do not respond in fear, but in Godfidence. They never strayed away from their faith in Jesus. It is through their faith, which set them free. It was the confidence to know they will triumph over the enemy attack. Jesus was a great example of triumph.

There is no situation that people will put us in that God will not show up in the mist of it. -Steven Furtick

We all go through the fire. For it is within the fire, we face our greatest challenge. Trusting in God. We must distinguish between the voice of God and the voice of the enemy. If we are not made aware of these two vastly different spirits, we will always be in the fire. For when God uses us, we are not confused by the one who is doing a great work for us and through us. God allows us to the endure the fiery furnace, not to punish us, but to call into us Faith, triumph over fear. In fact you’ll feel God walking into the fire with you.

Thank you for your support!

©TiffanyLee and Beutiflee.wordpress.com, 2018.  Unauthorized use and/or duplication of this material without express and written permission from this site’s author and/or owner is strictly prohibited. Excerpts and links may be used, provided that full and clear credit is given to TiffanyLee and Beutiflee.wordpress.com with appropriate and specific direction to the original content.

8 thoughts on “In the mist of the fiery furnace”

©TiffanyLee and truthandbeautyco.com, 2022.  Unauthorized use and/or duplication of this material without express and written permission from this site’s author and/or owner is strictly prohibited. Excerpts and links may be used, provided that full and clear credit is given to TiffanyLee and truthandbeautyco.com with appropriate and specific direction to the original content.